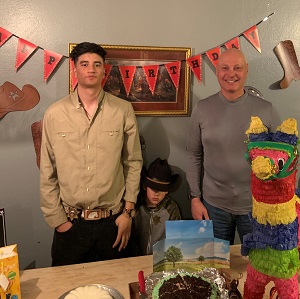 Their favorite activities include attending community events, going on all of the rides at the water park, and catching the latest films at the movie theater. In the winter, you can often find them at Sky Tavern, where they ski, snowboard, and enjoy lunch together.

In the years that they have been matched, George has enjoyed watching Julian grow up, and each says they have learned so much from the other. Julian says that his Big Brother is smart, and that he teaches him life skills and “how to be a better person.” In turn, George says that his Little Brother teaches him about kindness, thankfulness, and “being very appreciative for all I do for him.” George wants to teach Julian to take chances in life, and that it is alright to fail sometimes if you learn from it and move forward.

Since they have been matched, “Julian has become more confident in himself,” George says. “He is not afraid to stand up for what is right, express himself in a positive manner, and ask questions for things he does not know about.” Julian also recognizes the importance of this self-confidence in reaching his fullest potential. “[Self-confidence] teaches us how to react and to solve problems in the real world as we become teenagers,” Julian says. “By being able to be a role model to others, we can achieve anything in life without being scared.”

George’s favorite thing about being a mentor is teaching Julian the values of life. To anyone considering becoming a Big, George would say “take a chance in changing the life of a young person for a positive outcome.” And as they look to the future, George and Julian can’t wait to see what life brings. “I hope that Julian will find happiness in all that he does, and continue his education,” says George.